The Iranian regime has detained several employees of the British Embassy in Iran today.
CNN reported:

The AP reported on the detentions:

Iranian media said eight local embassy staff were detained for an alleged role in postelection protests, but gave no further details. British Foreign Secretary David Miliband said “about nine” employees were detained Saturday and that some had been released.

The detentions signaled a further toughening of Iran’s dealings with the West, which has become increasingly vocal in its condemnation of a crackdown on opposition supporters…

On Sunday, the semiofficial Fars news agency reported that the embassy staffers were detained for what was described as a “significant role” in postelection unrest.

Remember the big to-do and stampede of international lawyers and the Red Cross to look in on the Gitmo detainees? Will they leap so quickly to the defense of innocent protesters in Iran’s notorious Evin, which makes Gitmo look like Buckingham Palace? Will the Red Cross, or Red Crescent outside Iran, demand access to the prisoners to ensure their humane treatment? Or will they be abandoned to bloody injustice, highlighted by the fact that Iran’s Heinrich Himmler is now on the job?

Also, Kamangir just posted a statement by a group of Iranian bloggers about the Presidential elections and the subsequent events. 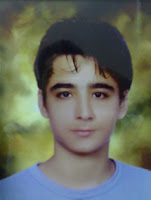 This was Ashkan Sohrabi, shot in the chest on Saturday, at the junction of the Roodaki and Dampezeshki. He was a keen sportsman, a black belt and second dan in Tae Kwan Do.