In case you missed it– Here is another shot of the Iranian soccer team wearing green wristbands yesterday in support of the protesters: 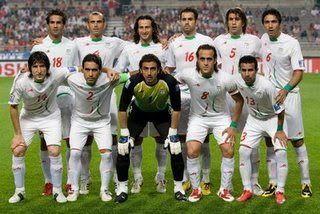 The police are now clashing in the streets of Tehran.
Moderates loyal to opposition candidate Mousavi are seen in this video clashing with hardliners on the street.

Bloggers in Iran have continued to post video on websites, including this segment, which claims to show a clash between police and protesters on Sunday (June 14).

On Thursday (June 18) supporters of Iran’s defeated presidential candidate Mirhossein Mousavi prepared to heed his call for a day of mourning for those killed in mass demonstrations against what he says was a rigged presidential election.

Official results in the poll showed Mahmound Ahmadinejad re-elected by a large margin and that’s been followed by Iran’s worst unrest since the 1979 Islamic revolution.

Yesterday there was another massive protest in Tehran. 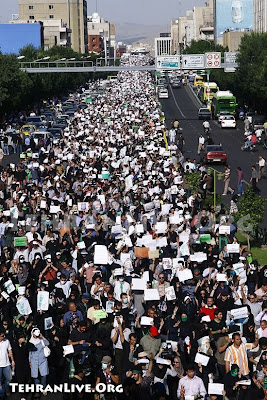 Iranian protestors to 2009 Presidental election results, had a “silent demonstration” at the 5th day of protests.
They moved from 7tir square to Enqelab square. The protestors want to revoke this elections. (Tehran Live)

Ahmadinejad: A Man Of The Cities. “Cities everywhere in the world are more broadly liberal and cosmopolitan than small towns and villages. Rural areas in the Middle East are often startlingly conservative, especially from the point of view of Western visitors like me and my colleagues in the media. This does not mean, however, that country people are more likely to support fascist political movements. Egypt’s Bedouin, for instance, are far more open-minded about and friendly toward Jews and Israelis than are the denizens of cities like Cairo. Backers of the Iraqi insurgency were based primarily in urban areas like Baghdad, Ramadi, and Fallujah. And as Nate Silver documents with hard data at FiveThirtyEight, even in 2005 most of Mahmoud Ahmadinejad’s supporters lived in Iranian cities, not the countryside.” 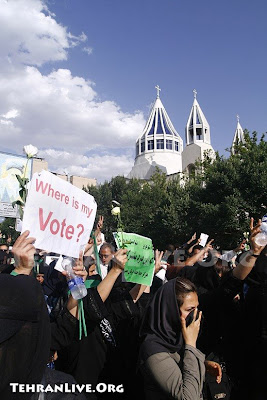 More Video: Police and protesters hand in hand in Iran:

MOUSAVI asks GOOGLE to change logo to GREEN for 1 day.