THOUSANDS RALLY FOR MOUSAVI IN TEHRAN– 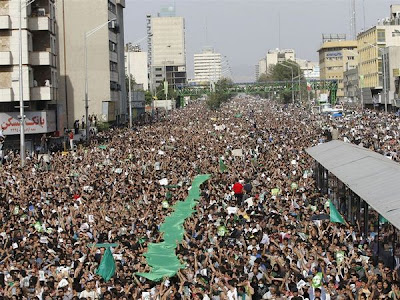 Here is the first video coming in from Tehran’s Revolution Square:

AFP news agency said Mr Mousavi told a crowd of tens of thousands in Tehran he was ready to take part in a new poll.

Mr Mousavi, who was making his first public appearance since Friday’s vote, believes results were rigged in favour of President Mahmoud Ahmadinejad.

Mr Ahmadinejad has dismissed the claims and says the vote was fair.

Winston reports that up to 1,000,000 attended the massive rally today. 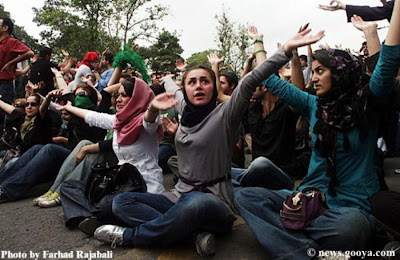 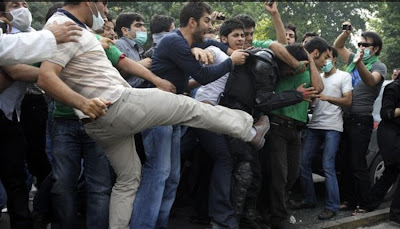 ** Rafsanjani’s house is being surrounded by security guards to prevent people from approaching. Rafsanjani who is the head of the Guardian and Expediency councils was charged by Ahmadinejad, who heads up the rival faction.

** Herana News Agency reports that hundred of detainees arrested during the Saturday and Sunday anti-regime demonstrations have been transferred to Tehran’s infamous Evin prison or a detention camp entitled Camp Kahreezak which is known for its filthy and generally sub par conditions. It is reported that the detainees are being color coded; Moussavi supporters have his name MOUSSAVI written on their clothing in green or red.

UPDATE: Breaking News is reporting that gunfire was reported at the rally. Former President Khatami called for the election results to be rejected.

UPDATE 2: People are getting killed in Azadi Square at the Mousavi rally. There are dispersed fights in Tehran; sound of shooting heard. Students are being surrounded in Shiraz Uni civil police (Basij) is in fight with people. An AP reporter at the scent said that at least one person is dead.
Another report— Many are wounded. 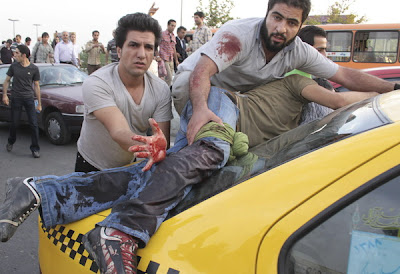 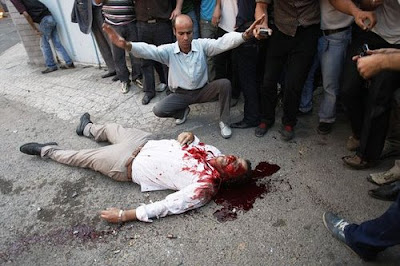 UPDATE 4: Here are images from Tehran University. The Basiji stormed the campus last night.
*** Our Iranian friends can access Twitter from 148.233.239.24 Port:80 in Tehran. FOX News is reporting on the Iranian Twitter Revolution. 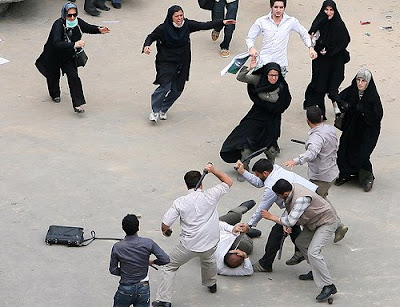 Iranian women come to the aide of a man being beaten, allegedly by the Basiji. (Flickr)

UPDATE 7: The media reported that there were 7-8 killed in the square. There were another 7-8 murdered by the regime at a university campus.