(This post will remain on top for most of today. Scroll down for updates.)

Courageous Iranian student activist Ahmad Betebi was sentenced to death by the evil regime in Iran after the student protests of 1999. He was severely tortured for years in the notorious Evin Prison in Iran. Last year Ahmad Batebi arrived safely in the United States. 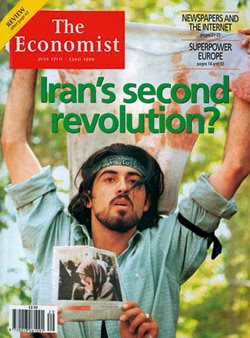 NINE years ago, Ahmad Batebi appeared on the cover of The Economist. This photo made Batebi famous. It also made him a target of the regime.
After his escape from the regime in 2008 The Economist followed up on their previous story with a Batebi interview in July 2008.

Tonight I had the great honor of interviewing one of the great Iranians of our time, Ahmad Batebi. The interview took 30 minutes. I broke it down into 4 clips. They are all posted below.

Part 1: The recent protests are much larger than the student protests in 1999. The regime broke into the same dorm that they broke into back in 1999.

Part 2: Ahmad Batebi talks on the Iraqi influence and whether or not we are witnessing a revolution in Iran.

Part 3: Ahmad Batebi says that Obama’s lack of response will not be regarded kindly by the Iranian people… And much more…

Here is Batebi on Obama:

“His (Obama) lack of response will not be regarded lightly. We will watch for how much his response will help the people or the regime. We will know more this week… Obama can hold talks with the regime in Iran if he wants. Is it morally correct for Obama to support the regime? Does he actually believe the people of Iran will appreciate that? The social movement requires support. If the world really wants the advent of terrorism to disappear in the Middle East, if they want peace with the Palestinians and Israel, if they want nuclear techhology to be developed for peaceful things and not nuclear weapons… They only need to support the people of Iran right now. This regime has the most dangerous of ideologies. They’re killing the opposition.

Part 4: Ahmad Batebi discusses the US response to the Iranian crisis:

Here is Batebi from Part 4:

The regime has dwindled the internet speed down to a minimum right now. They’ve disconnected all the phones. All the SMS and text messaging has been disconnected. They’ve thrown out Western and foreign journalists. They’ve closed down all Iranian newspapers. They’ve put filters on all of their opposition websites. They’ve arrested dozen of activists, human rights and civil activists. They are arresting and beating dozens of people on the streets every day. And, people need to know that if they do not stand by the Iranian people shoulder to shoulder right now, that they themselves will come face to face with this very regime. And if this regime is allowed to have a nuclear weapon it will do the exact same thing with the entire world. This regime does not represent the people of Iran. And, morally the people of the world need to support the people of Iran and not what the regime wants.”

** Earlier this week Iranian student activist Kianoosh Sanjari also said that the people of Iran will not forgive Barack Obama for siding with the evil regime.

UPDATE: Ahmad Batebi was interviewed by “60 Minutes” earlier this year and described the horrible torture he endured while in prison- video HERE.