“Everyday under the fist and boot of the interrogators, Kianoosh’s cries silenced the entire ward.”

Kianoosh Sanjari, was first arrested at age 17 in Iran. He was arrested over 9 times until his escape from the regime in 2007. Kianoosh was a student of Art in Sama University of Sari and member of Jebheye Motahed Daneshjoo’I (a secular student group). He was banned from university because of his pro-democracy activities.

Sanjari, whose belongings, including his computer, mobile telephone, books, files, etc. were confiscated by the secret service agents, was not even permitted to be represented by a defense lawyer during his detention.

After escaping from the regime in 2007, Kianoosh Sanjari enjoys his freedom in America today.

Banafsheh Zand-Bonazzi was born in Tehran in 1961 to Iranian journalist parents. She attended the American University in Paris as well as at the IDHEC, the French Institute of Higher Cinematic Studies. In 1982 she came to the U.S. and continued studies at the, University of Maryland. She studied film as well as linguistics and semiotics. Banafsheh has worked in the film industry, as a second assistant director, associate producer and line producer on feature, independent and documentary films for the big screen and HBO.

In 1998 Banafsheh began working on a documentary about the assassinations of Iranian writers, activists and scholars who opposed the regime of Iran at the hands of the Islamic Republic’s secret police. While working on that project, in 2001 Banafsheh’s father was abducted by the same secret police of the Islamic Republic of Iran and was imprisoned and tortured. This became the point where Banafsheh took her experiences and contacts of 22 years of activism and began her work as a full-time political and human rights activist. She and her husband, Italian political scientist, Elio Bonazzi write regularly for many American and European political publications. Banafsheh has appeared on CNN, Fox, BBC, C-Span , Aljazeera and Voice of America TV.

Banafsheh was one of the organizers of the Secular Islam Summit that took place in Saint Petersburg, Florida in 2007; she was also the editor of the English department of the website Iran Press News and is producing Planet Iran which is the most comprehensible site covering all aspects of Iran and Iran-related news.

Tonight, I had the pleasure of discussing the situation in Iran with these two noted human rights activists. Banafsheh translated for Kianoosh.
This was the most comprehensive discussion on the current situation in Iran that is available to the West. Kianoosh has been following the developments since things exploded last Friday night.

The video is long– 46 minutes– But you will not read this same information in the mainstream news. It is recorded in Farsi and English:

In this video Kianoosh Sanjari reveals:

** Ayatollah Khomenei’s grand-daughter was arrested during a recent demonstration.

** On the night of the election after his vote Rafsanjari called on the people to demonstrate.

** There is a great split between the two factions of hardliners and moderates. It is reminescent of the 1979 revolution.

** The people of Iran will not forgive Barack Obama for siding with the evil regime. 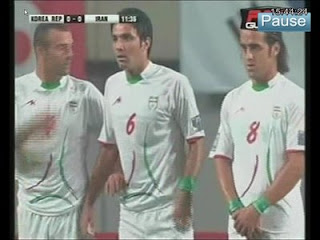 ** Even the soccer players protested today during their match with South Korea. The coach protected his players by telling the Iranian press that the team was wearing green armbands because of religious reasons- that the players were actually showing their faith. But, this was the first time the team has ever worn green wristbands, ever.

** Thousands of doctors and nurses in their uniforms were protesting in the street yesterday.

** The regime has a list of reporters and websites and have threatening the reporters on their list.

** There is a cyber-war going on in Iran today between the moderates and the hardliners. Each group is trying to take down the other groups websites.

** Ayatollah Khameini had no idea the protests and reaction by the people would be so great.

** The Opposition wants to drag the protests out until Friday. Khameini will likely congratulate Ahmadinejad. Then it will be up to the West to decide if they will allow these savages to continue their rule.

** Kianoosh has contacts in Iran who are feeding him information daily.

It was an honor to finally speak with Kianoosh Sanjari tonight.
I have been following his story since the time he was arrested and sent to Evin Prison in 2006.
What a great young man. What a hero.