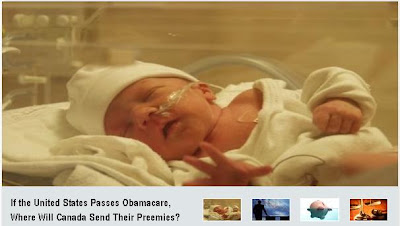 If the United States Passes Obamacare, Where Will Canada Send Their Preemies?

Ava Isabella Stinson was born at St. Joseph’s Hospital in Hamilton, Ontario on Thursday of last week. Ava was 13 weeks premature. She weighed only two-pounds, four-ounces at birth. Ava needed special care and equipment to keep her alive. Unfortunately, there were no open neonatal intensive care beds for her at St. Joesph’s Hospital. In fact there were no open neonatal care beds in her entire Canadian province. Ava had to be transferred to the United States. CP24 reported on Little Ava’s ordeal:

A critically-ill premature-born baby from Hamilton is all alone in a Buffalo, N.Y., hospital after she was turned away for treatment at local facility and transferred across the border without her parents, who don’t have passports.

A province wide search for an open neonatal intensive care unit bed came up empty, leaving no choice but to send the two pound, four ounce baby to Buffalo.

Her parents Natalie Paquette and Richard Stinson couldn’t follow their child because as of June 1, a passport is required to cross the border into the United States.

They’re having to approve medical procedures over the phone and are terrified something will happen to their baby before they get there.

The Canadian Consulate in Buffalo is providing advice and guidance to the first-time parents, and their local MP, New Democrat David Christopherson, is working to arrange emergency passports.

This was not an isolated incident. Hamilton’s neonatal intensive care unit (NICU) is closed to new admissions about 50 per cent of the time. The rest of the special needs babies are sent elsewhere and often to the United States. Don Surber reported that this tends to be the rule rather than the exception:

Remember the Jepp quads? Thanks to socialized medicine, there was no hospital in the second-largest nation on Earth that could accommodate the quadruple birth and so Mrs. Jepp flew 325 miles from Calgary (population 1 million) to Great Falls, Mont. (population 56,000) to give birth. She may be Canadian, but her 4 daughters are American.

Well, it turns out the Jepp quads are not the exception, they are the rule. Rather than build enough neo-natal intensive care units to handle their preemies, the Canadian government ships mothers to the United States to give birth.

In fact, there were at least 40 mothers or their babies who were airlifted from British Columbia to the United States in 2007 because Canadian hospitals didn’t have room for the preemies in their neonatal units. Mark Steyn calls it the ten-month waiting list for the maternity ward.