Things don’t look good for Dear Leader.
Government reports have shown the economy has lost more than 1.6 million jobs since Congress approved the Stimulus bill in February. There is record unemployment in 12 states. The US unemployment rate rose from 7.6% to 9.4% under Obama… the highest rate in 25 years.

Thankfully Dear Leader can rely on the state-run media to run a fluff piece on his wonderdrous employment opportunities: 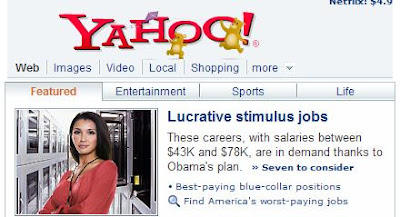 President Barack Obama’s plan to get the U.S. economy going has a strong focus on creating jobs. Two of the bills he’s recently signed, the American Recovery and Reinvestment Act (ARRA) and the Making Home Affordable program, provide funding that will create a wide variety of job opportunities with good salaries. Better yet, many of these jobs don’t require a four-year degree, so job-seekers may be able to move into these careers pretty quickly.

Unreal. Could you even imagine a Republican getting this kind of press with an unemployment rate at 9.4%?
Never in a thousand years.