Those innocent Chinese Uighur terrorists who trained in Al-Qaeda camps in Tora Bora told FOX News reporter Catherine Herridge at Gitmo.
They told her Obama was communist just like what they have in China. 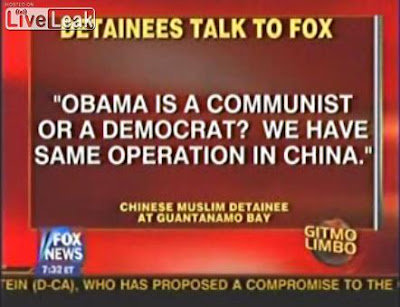 Miss Underestimated has the video, via LGF.

Unfortunately, the Uighurs are off on this one.
The government in China understands capitalism. Team Obama doesn’t.
In fact China even started preaching to democrats about free market economics this year.
Hope and change.

The Uighur terrorists in question were trained by Al-Qaeda at terror training camps. Shawn noted that some of the Uighur detainees were trained in Tora Bora. They are also linked to the terror group that was planning attacks on the Beijing Olympic.