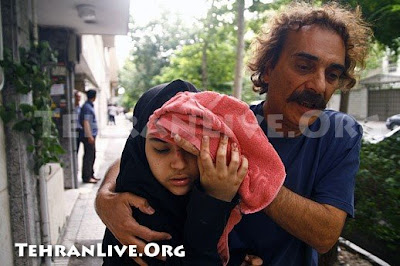 A young girl’s head is broken by stone in Iran. (Tehran Live)

The White House maintained its cautious tone on the disputed election and subsequent upheaval in Iran on Monday, while a GOP leader lashed out at “the administration’s silence.”

Meeting with the press before President Obama’s speech to the American Medical Association in Chicago, White House spokesman Robert Gibbs said, “I think there are a number of factors that give us some concern about what we’ve seen.”

“Obviously we continue to have concern about what we’ve seen. Obviously the Iranians are looking into this, as well,” Gibbs told reporters. “We continue to be heartened by the enthusiasm of young people in Iran.”

The State Department said they “have doubts” about the election, but spokesman Ian Kelly said they weren’t prepared to assess the election results beyond that.

House Minority Whip Eric Cantor (R-Va.) lambasted the White House in a statement Monday afternoon, as reports came out of Iran of at least one protester killed in the tumult after President Mahmoud Ahmadinejad claimed a landslide victory over challenger Mir-Hossein Mousavi on Friday.

“The Administration’s silence in the face of Iran’s brutal suppression of democratic rights represents a step backwards for homegrown democracy in the Middle East,” Cantor said. “President Obama must take a strong public position in the face of violence and human rights abuses. We have a moral responsibility to lead the world in opposition to Iran’s extreme response to peaceful protests.

“In addition, Iran’s clerical regime has made clear that its nuclear program will move forward,” he said. “The United States cannot trust the aspirations of a nation that is a state-sponsor of terrorism, and the Administration must work with Congress to do everything in its power to deny Iran nuclear weapons.”

Democracy does not have the same value with this administration as it used to.