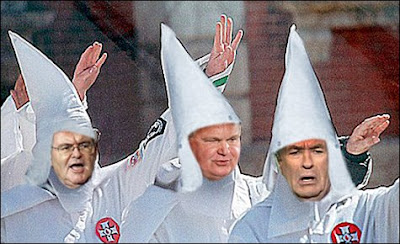 Never mind that the KKK was a democratic group that slaughtered Republicans. In fact the only KKK kleagle sitting in the US Senate is a democrat.

Conservatives scoffed in April when the Department of Homeland Security warned that the United States could face another wave of homegrown attacks.

Is the murder of abortion doctor George Tiller in Kansas this past weekend the start of a new anti-choice terror campaign? Combine with Tiller’s assassination the right-wing outcry over President Barack Obama’s restoration of federal money to overseas organizations that perform abortions and there could be serious cause to worry.

Could you even imagine if a GOP paper posted something like this?
The state-run media would be all over it.

More… Underground Conservative adds this in the comments:

The reason they didn’t include Robert Byrd is that they wanted a “this is obviously Photoshopped” quality to the photo. With Byrd, they would’ve had REAL photos that were very obviously not Photoshopped.

Right. They wanted to keep it a spoof.
That would be too real.