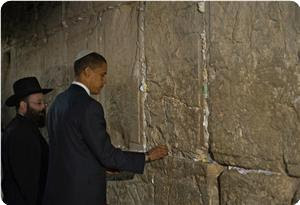 Obama made a made dash to the Middle East before the election for a photo op and promised permanent support to Israel and rejected talks with Hamas. Above: Following a Jewish tradition, Barack Obama leaving a written message to God in an opening in the Wailing Wall, in Jerusalem (PIC, 7/25/08).

Since his inauguration Obama has restored ties with Syria and Venezuela and gave $73 million to the Mugabe regime and invited the killer Iranian regime to a 4th of July weenie roast.
At the same time he’s threatened Israel and distorted its history.
Caroline Glick nails it today:

Have American Jews abandoned Israel in favor of President Obama? This is a central question in the minds of Israelis today.

In a poll of Israeli Jews conducted in mid-June by the Jerusalem Post, a mere 6 percent of respondents said they view Obama as pro-Israel. In stark contrast, a Gallup tracking poll in early May showed that 79 percent of American Jews support the president.

These numbers seem to tell us that U.S. Jews have indeed parted company with the Jewish state.

No American president has ever been viewed as similarly ill disposed toward Israel by Israelis. With only 6 percent seeing the administration as friendly, it is apparent that distrust of Obama is not a partisan issue in Israel. It spans the spectrum from far left to right, from ultra-Orthodox to ultra-secular. But with his 79-percent approval rating among U.S. Jews, it is clear the American Jewish community is quite sympathetically inclined toward Obama.

Appearances of course can be deceptive. And it is worth taking a closer look at the numbers to understand what they tell us about American Jewish sentiments regarding Obama and Israel. First, however, we should consider what it is about Obama that makes nearly all Israeli Jews view him as an adversary.

The Jerusalem Post poll showed a massive divergence between Israeli Jews and Obama on the issue of Jewish building beyond the 1949 armistice line. The Obama administration has refused to budge in its hard-line demand that Israel end all Jewish building in north, south, and east Jerusalem as well as in Judea and Samaria.

Beyond Obama’s agitation on the issue of Jewish construction, Israelis are dismayed by what they perceive as the generally hostile approach he has adopted in dealing with the Jewish state. This approach was nowhere more in evidence than in his speech to the Islamic world in Cairo on June 4.

It wasn’t just Obama’s comparison of Palestinian terrorism to the anti-Apartheid movement in South Africa, the American civil rights movement and antebellum slave rebellions that set people off. There was also Obama’s inference that Israel owes its legitimacy to the Holocaust.

It is that claim – Obama repeated it during his visit to Buchenwald – which forms the basis of the Islamic narrative against Israel. It argues that Jews are not indigenous to the Middle East, and that the only thing keeping Israel in place is European guilt about Auschwitz. Not only do Israelis of all political stripes reject this as factually false, they recognize it is inherently anti-Semitic because it ignores and negates 3,500 years of Jewish history in the land of Israel.