You’ve gotta love this…
The NRA will honor Sarah Palin with an assault rifle next week. 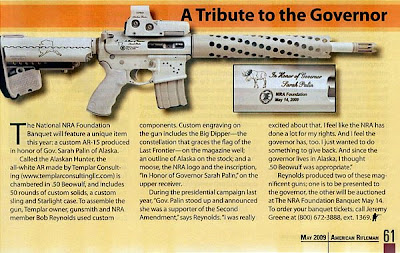 The rifle is engraved with Palin’s name and adorned with a map of the state on the collapsible stock.
The New York Daily News reported, via Free Republic:

Alaska Gov. Sarah Palin was bashed for her pricey wardrobe, but now she’s getting a lethal accessory.

The all-white “Alaskan Hunter” – fashionable until Labor Day – is the civilian version of a modified M-4 rifle carried by U.S. troops overseas.

Alaska’s feisty Republican governor, who is weighing a potential 2012 presidential bid, will receive the rifle made by Templar Consulting at a May 14 NRA banquet.

It’s engraved with Palin’s name and adorned with a map of the state on the collapsible stock – made legal after the expiration of the assault weapons ban in 2004. The Big Dipper from the state flag is etched on the magazine well behind a vented barrel guard.

The rifle is chambered in .50-caliber “Beowulf.” It’s the same caliber used by heavy machine guns, which can take down big game, and in war zones “can disable both motor vehicles and assailants with body armor,” according to ammo manufacturer Alexander Arms’ Web site.

UPDATE: This comes from Mike:

Regarding the Palin rifle. The referenced article correctly identifies it as a .50 Beowulf but then goes on to, intentionally I’m sure, conflate it with the .50 BMG “the same caliber used by heavy machine guns”.

Hardly. .50 Beowulf is an interesting powerful cartridge, but not remotely in the class of the .50 BMG. Here is a link to a picture comparing the .50 BMG and .50 Bewoulf, among others.

Hate to see their nonsense perpetuated.