Wanna Get Away?…
After the recent news that Democrats were spending hundreds of thousands of taxpayer dollars on the Murtha Airport to nowhere Republicans put together this ad: 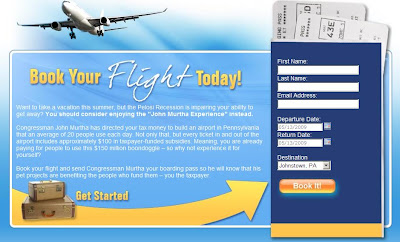 Click to Enlarge
This was just too good, via LGF:

Want to take a vacation this summer, but the Pelosi Recession is impairing your ability to get away? You should consider enjoying the “John Murtha Experience” instead.

Congressman John Murtha has directed your tax money to build an airport in Pennsylvania that an average of 20 people use each day. Not only that, but every ticket in and out of the airport includes approximately $100 in taxpayer-funded subsidies. Meaning, you are already paying for people to use this $150 million boondoggle – so why not experience it for yourself?

Book your flight and send Congressman Murtha your boarding pass so he will know that his pet projects are benefiting the people who fund them – you the taxpayer.

Related… Murtha’s opponent in the 2008 election says he was threatened by the Murtha Team while he was running against the antiwar democrat last fall.