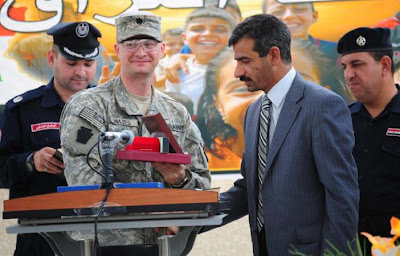 US soldiers shot dead a 12 year-old boy after a grenade attack this week.
The boy was holding 10,000 Iraqi dinars, or around $8.50, in his hand.
Reuters reported:

The U.S. military said on Saturday its troops had shot dead a 12-year-old Iraqi boy suspected of throwing a grenade at them, and said it believed insurgents were paying children to help them.

Iraqi police, speaking on condition of anonymity, said however the boy, whom they named as Omar Moussa Salih, had not been involved in the grenade-throwing.

U.S. and Iraqi forces came under grenade attack Thursday in the western part of Mosul, the northern city seen as a final stronghold of al Qaeda and other insurgents, said Major Derrick Cheng, a U.S. spokesman in northern Iraq.

“We have every reason to believe that insurgents are paying children to conduct these attacks or assist the attackers in some capacity, but undoubtedly placing the children in harm’s way,” Cheng said.

Iraqi police in Mosul said the boy, who had sold sweets in the street, was shot more than once in the head. His eight-year-old brother ran away when Omar was shot, police said.

Al-Qaeda is now not just using women but children too for their attacks.
Who do you suppose the Left will blame?