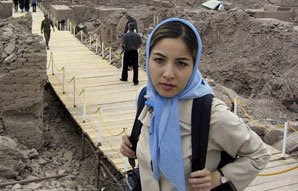 An American journalist who was detained in Iran on espionage charges has been released after an Iranian appeals court suspended her prison term, an Iranian judiciary source told Reuters.

Roxana Saberi was released from Tehran’s Evin jail on Monday, according to the report.

Saberi, a 32-year-old dual American-Iranian national who grew up in Fargo, North Dakota, was convicted last month of spying for the U.S. and sentenced to eight years in prison. An appeals court heard her case on Sunday.

Roxana Saberi was sentenced to eight years in jail on spying charges. Saleh Nikbakht, one of the two lawyers who defended Roxana Saberi in an appeal hearing on Sunday, said the court reduced the eight-year jail term and issued a two-year suspension instead.