The Taliban is holding 2,000 Pakistanis as human shields in the Buner district outside of the capital Islamabad. 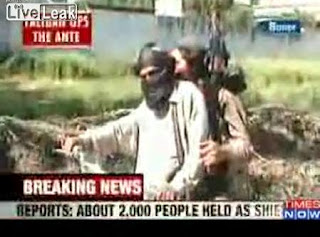 The Taliban had promised to disarm after a peace deal was signed earlier this year but instead have invaded adjoining provinces.
Press Trust of India reported:

Taliban militants were holding 2,000 people in Buner district of restive North West Frontier Province in Pakistan to use them as human shields in case the army attacked.
Taliban’s move came as Pakistani forces stepped up their campaign to retake territory in the districts of Buner, Dir and Swat. The military said they had killed more than 100 militants and lost several soldiers since fighting began on Tuesday.

“Kidnapping has become routine in our village. Armed Taliban were picking up people and then demanding a huge ransom for their release,” said an elderly refugee now living with his family in a tent in Timergara, a town in Dir.

According to the paper, many of the 90,000 refugees fleeing the conflict zone in NWFP welcomed the military action despite their anger at being forced to leave their homes.

The militants promised to disarm but instead moved their forces into neighbouring Dir and Buner, about 100 km from federal capital triggering panic in Pakistan and heightening fears in the US about the stability of the nuclear-armed state.