Michelle Obama is back at it. 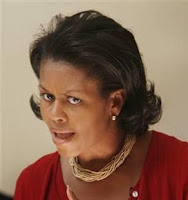 The disgruntled First Lady dissed her former employer during her commencement speech at Merced University on Saturday.
Lynn Sweet at the Chicago Sun-Times reported:

First lady Michelle Obama for the second time has talked about how alienated she was from the University of Chicago when she was growing up on the South Side.

Mrs. Obama commented about her relationship with the U. of C. in a commencement address she delivered Saturday at the University of California, Merced — echoing remarks she made to children in March at a school here…

“Yet that university never played a meaningful role in my academic development. The institution made no effort to reach out to me — a bright and promising student in their midst — and I had no reason to believe there was a place for me there.

“Therefore, when it came time for me to apply to college, I never … considered the university in my own backyard as a viable option.”

…Ironically, the U. of C. would become a focal point of her life: She was a high-level administrator at the school and medical center; President Obama taught at the law school for many years; their daughters attended the Lab School; their close friends are on U of C boards and were major presidential campaign fund-raisers and many members of the Obama White House have ties to the institution anchoring Hyde Park.

Oh Michelle, calm down.
The truth behind this story is that Michelle decided on Princeton because her brother played basketball there. In fact she entered Princeton despite the fact that her test scores were not high enough for her to be accepted into the school.

She forgot to mention that to the students at Merced.

And, although she dissed the school in her talk, Michelle Obama was a high-level administrator at the school and medical center and President Obama taught at the law school for many years.
Lovely.