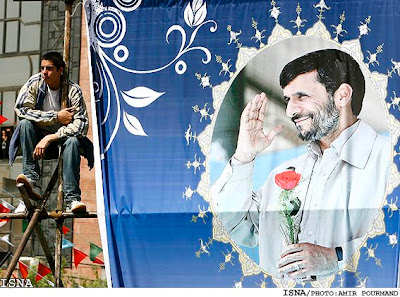 Ahmadinejad is out campaigning for the upcoming regime election. Here is a banner from one of his rallies. (ISNA)

Ahmadinejad called today for the Zionist regime to be uprooted.
Fars News reported:

Iranian President Mahmoud Ahmadinejad on Sunday called on certain world powers which played a role in the creation of the Zionist regime to dismantle the regime or accept arrangement of a referendum to determine the fate of the occupied Palestine by its own residents.

“If bullying powers don’t desist from (their) crimes, they should know that nations will uproot them,” he added.

Addressing the bullying powers, Ahmadinejad said, “You have always defended the Zionist regime and called Palestinians’ elected government terrorist for showing resistance and defending their rights, but the era for the bullying of your fake regime has come to its end and you have no choice but to accept the reality.”