Lt. Roslyn Schulte was the first female Air Force Academy graduate to be killed in Iraq or Afghanistan. She died last week in Afghanistan after the vehicle she was riding in was struck by a roadside bomb. 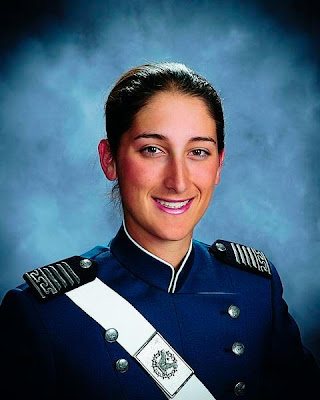 Lt. Schulte could have attended an Ivy League school. Instead she chose the Air Force Academy. She dreamed of being a fighter pilot since she was 12. At the academy, she was among the top in her class.

Her funeral was yesterday at the Congregation Temple Israel in St. Louis.
Her boyfriend U.S. Air Force Cpt. Bruce Cohn announced that he was going to propose to Roslyn this summer.
The St. Louis Post Dispatch reported:

Hundreds squeezed into the pews and lined the walls at the Congregation Temple Israel to pay tribute to Lt. Schulte, 25. The rabbi noted two stone tablets that hang outside the temple walls, bearing the names of members who have died fighting for their country. Under the dates 1917-1918, five names were etched. Under 1941-1945, 10 names.

“Until this week, those tablets only received a passing glance,” Shook said. “So many years have passed since two world wars took the lives of our loved ones. Until this week, the realities of war were an abstraction.”

Sixty-four years later, Lt. Schulte’s name will be etched there, too.

Not only did Lt. Schulte’s death bring the realities of war to the synagogue, it reached into other communities as well. Lt. Schulte was the Air Force Academy’s 10th graduate — and first female graduate — killed in the Iraq and Afghanistan wars, officials said. She grew up in Ladue and attended John Burroughs School, where she captained a state championship lacrosse team…

After the funeral, a long procession traveled to New Mount Sinai Cemetery in south St. Louis County, at times closing parts of Highway 40 and Interstate 270.

The rabbi read Scripture and a poem to the crowd, gathered under umbrellas. The rain briefly stopped for Lt. Schulte’s gun salute.

Please keep the Schulte family in your thoughts and prayers.