Sorry, Barack: You Can’t Blame the Bogeyman for Your Record Budget Deficits, Too 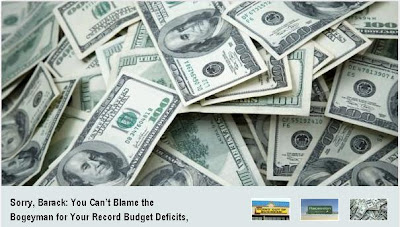 On July 11, 2006, the Bush Administration announced they were revising midyear budget estimates. They changed their projections after they discovered that greater than expected tax revenues would drop the deficit below 300 billion dollars. Budget Director Rob Portman drove home the message later that day telling reporters that this latest revision was proof that the administration’s tax cuts were working.

But, things changed in 2007. Democrats took over Congress, gas prices started to rise, and at the end of the year and into 2008 several financial institutions started to crumble as the housing bubble began to burst. Of course, it should be noted that President Bush publicly called for the reform of Fannie Mae and Freddie Mac 17 times in 2008 alone before Congress acted. Democrats, on the other hand, blocked reform numerous times. It was later reported after the 2008 election that Bush had nothing to do with the financial crisis. Hoover Institution visiting fellow Scott S. Powell wrote in Barron’s in February of this year that the present crisis began in the 1970s, during the Carter administration, with passage of the Community Reinvestment Act to stem bank redlining and liberalize lending in order to extend home ownership in lower-income communities. This risk was acknowledged in the Bush administration’s first fiscal-year budget, released in April 2001. Sadly these warnings were ignored by Congress.

But, this didn’t stop Barack Obama and democrats from blaming George Bush for the market meltdown last year…

You can read the rest here. There is also a list of my recent columns at the page.