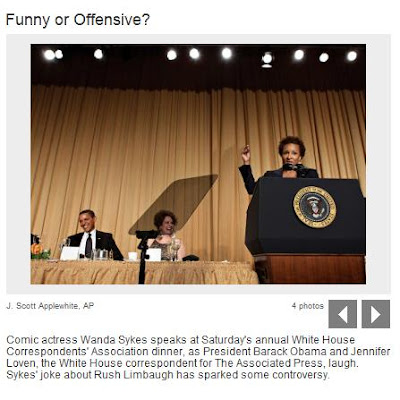 The AP covered for Barack Obama laughing at a dead Rush Limbaugh joke by Wanda Sykes at the White House Correspondents Dinner.
Barack Obama chuckled at the joke.

WASHINGTON (May 11) — The White House is keeping its distance from an entertainer’s joke comparing commentator Rush Limbaugh to a terrorist.

Sykes jabbed at Limbaugh for suggesting that he wants Obama to fail. She said Limbaugh’s view was essentially the same as al-Qaida terrorist leader Osama bin Laden’s. She suggested Obama might want to look into the matter “because I think Rush Limbaugh was the 20th hijacker.”

Gibbs said the Sept. 11 terrorist attacks is a topic “better left for serious reflection than comedy.”

Nothing… Nothing about Obama giggling at the “hope his kidneys fail” joke.

But, what did you expect when the hyper partisan Jennifer Loven was sitting next to the president and giggling along with him.

Caleb at RedState breaks it down– “This weekend’s dinner was focused on three things. 1. Extreme partisan rancor. 2. Hollywood glitz. 3. Glory to The One.”