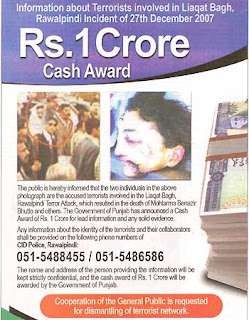 Pakistani officials published ads in regional papers after the assassination asking for help in identifying Bhutto’s killer(s). Hersh believes they should have looked in the VP’s secret bunker.

“Cheney was the chief of the Joint Special Operation Command and he cleared the way for the US by exterminating opponents through the unit and the CIA. General Stanley was the in-charge of the unit,” The Nation quoted US columnist Seymour Hersh, as saying.

The US death unit killed Bhutto because she had told Al-Jazeera TV about the assassination of Osama Bin Laden, Hersh said.

…According to Hersh, the former Lebanese PM Rafique Al Hariri and the army chief were murdered for not safeguarding US interests and for refusing to set up US military bases in Lebanon.

Ariel Sharon, the then prime minister of Israel, was also a key man in the plot, he said. (ANI)