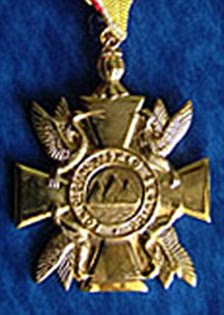 A British medal established by the Queen will be withdrawn after if was found to be too offensive to Muslims (and Hindus).
The Daily Mail reported:

A medal established by the Queen is being withdrawn after it was declared unlawful and offensive to Muslims and Hindus.

The cross-shaped honour – The Trinity Cross of the Order of Trinity – has been handed to distinguished members of the former colony of Trinidad and Tobago.

Cricketers Brian Lara and Garfield Sobers are among those who have received the medal along with diplomats and politicians.

The Christian name and cross are now being replaced with the Order of the Republic of Trinidad and Tobago – a circular medal featuring a sun, stars, water and a map of the islands.

The Privy Council, made up of 12 law lords, ruled the merit decoration was unlawful because it discriminates against non-Christians.

Now other honours are being reviewed over their references to Christian Saints or symbols.

For some reason, I’m guessing it was the Muslims and not the Hindus that were feeling slighted… But, that’s just me.