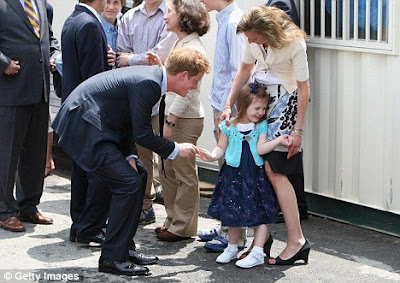 Charming: The Prince gets a shy giggle from Madisen Iken. Her mother Monica lost her husband during the terrorist attack. (Daily Mail)

Prince Harry visited New York today where he paid his respects to the 3,000 victims of the September 11 attacks.
The prince who fought with British troops in Afghanistan last year also met with firefighters who lost lost friends on 9-11.
The Daily Mail reported:

Prince Harry today paid tribute to the 3,000 victims of the September 11 attacks, laying a wreath at Ground Zero in New York.

In a sombre start to his two-day visit of the city, Harry bowed his head and observed a minute’s silence after placing the memorial on the fence where the World Trade Centre once stood…

Before laying the wreath on the wire fence, he spoke to families of those killed in the attack.

Speaking before his arrival, Monica Iken, a 39-year-old New Yorker who lost her husband Michael in the atrocity, said it was fantastic Harry was making the effort to attend the site.

She said: ‘It is great he wanted to come here and show that people still care, and it shows respect to our loved one that died on that day.’

After observing a minute’s silence, the prince took a step back and bowed again.

He was then taken to see designs of the proposed building which will replace the World Trade Centre.