But, Speaker Pelosi is more interested in keeping the planet green this week.
She is attending an environmental conference in China this week and will not be addressing China’s human rights violations. 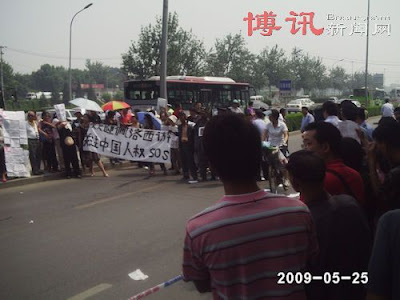 Boxun reports that Sunday May 24 was the third day of large-scale protests outside the Beijing Supreme Court in southern Beijing. Due to growing frustration with the slow pace of justice for petitioners, the protests are growing larger by the day. The protests are also timed to coincide with U.S. House of Representatives Speaker Nancy Pelosi’s arrival in Beijing for talks with the government. Pelosi is an outspoken critic of China’s human rights record.

Here is video via Boxun News from their human rights protest today in China:

Boxun News is banned in China.