Oh, this is rich!
The LA Times demanded this week that President Obama release the detainee torture photos:

The Times insisted, “The truth must out.”

Of course, this is the same outfit that hid a video of Barack Obama attending a Jew-bash and toasting a former PLO operative Rashid Khalidi before the election.
Rashid Khalidi and Bill Ayers were practically best friends.
And, both Ayers and Obama signed the commemorative book given to Khalidi at his going away party.
But the LA Times would not release the video.

In case they forgot… There was even a “Free the Tape” protest outside their building before the election: 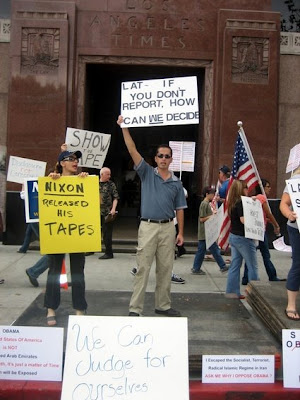 Mere Rhetoric has more photos and video.
Oh, the irony.