Funny. This wasn’t the headline in The New York Times.
It was buried down in the article. 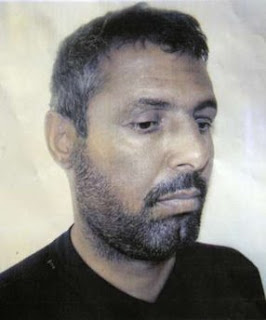 The New York Times published an article this week on the capture of Al-Qaeda in Iraq leader Abu Omar al-Baghdadi. In the report Iraqi Prime Minister told reporters that Al-Baghdadi had close ties with the Saddam Hussein regime.
The New York Times reported:

Prime Minister Nuri Kamal al-Maliki said Tuesday that Iraqi forces had recently arrested a leader of the Sunni insurgency who had been in league with members of Saddam Hussein’s ousted Baath Party.

Iraqi officials say the insurgent, Abu Omar al-Baghdadi, is the leader of the Islamic State of Iraq, an umbrella group that includes Al Qaeda in Mesopotamia, the homegrown group that American intelligence officials say is led by foreigners.

The government has not provided proof of his capture since announcing the arrest on Thursday, beyond showing a photograph of a man with a trimmed beard wearing a black T-shirt. In 2007, Iraqi officials announced twice that Mr. Baghdadi had been captured and killed. A spokesman for the United States military, which has suggested that he might not exist, said Tuesday that the military could still not confirm his arrest.

Mr. Maliki, who spoke out Tuesday on the arrest for the first time, has increased his anti-Baathist language in recent weeks and has resisted American pressure to reconcile with more approachable members of the party. Many analysts say they believe that he is under pressure from his Shiite partners in the government, some of them allied with Iran.

“This terrorist had deep ties with the former regime and created with its followers a devil’s pact reflected in bloody scenes of carnage involving innocent children and women and the elderly,” Mr. Maliki said.

His statement coincided with the birthday of Mr. Hussein, who would have turned 72 and was executed in 2006…

In an interview with the British Broadcasting Corporation on Monday, Mr. Maliki said all of the recent attacks had resulted from coordination between Qaeda militants and elements of Mr. Hussein’s Baathists.

“They agreed that Al Qaeda would carry out the suicide attacks, while the Baathists would do the remote-control bombs,” he said.

This is not the first time that we have heard about Saddam Hussein’s links to Al-Qaeda.
The Iraqi newspaper Kurdistani Nwe published a letter in June 2008 on the front page from Saddam Hussein requesting a meeting with Al-Qaeda second in command Ayman Al-Zawahiri: The letter was posted today on the MEMRI blog: MEMRI reported on this letter from 2002:

The Kurdish daily Kurdistani Nwe has published a 2002 letter from the Iraqi presidency that it says proves that there was cooperation between the regime of Saddam Hussein and Al-Qaeda.

The letter, which appeared on the paper’s front page, was published by the intelligence apparatus of the Iraqi presidency and discussed an intention to meet with Ayman Al-Zawahiri in order to examine a plan drawn up by the Iraqi presidency to carry out a “revenge operation” in Saudi Arabia. A letter published in the Kurdish news shows that Iraqi tyrant Saddam Hussein (right) reached out to Al-Qaeda’s number two man Ayman Al-Zawahiri (left). Saddam wanted a meeting to discuss a revenge operation he was planning in Saudi Arabia.

Remember this the next time you see a mainstream media report claiming there was no links between Saddam and Al-Qaeda.

Previously:
Picture Proof: The Saddam-Al Qaeda Connections
NYT: Saddam Was a Year Away from Building A-Bomb!
The Saddam-Al Qaeda Links: In Photos and Video
Bush Did Not Lie!… Saddam Officials Had “Good Relationship” With Zarqawi
Iraqis Publish More Proof Of Saddam Links To Al-Qaeda Leadership