The White House announced that they would meet Nevada Governor Jim Gibbons at the airport when Barack Obama arrives in Las Vegas today for a fundraiser with Senator Harry Reid.
The governor had requested a meeting with the president when he came to town. 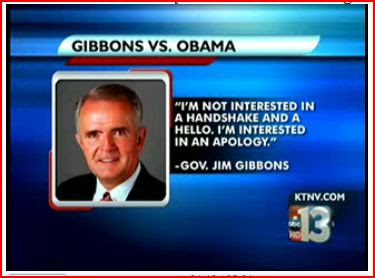 HotAirPundit has the video, via Free Republic.

Meeting News reported that Gibbons will not meet with Obama today:

Nevada Gov. Jim Gibbons has declined an invitation to meet briefly with President Barack Obama while he’s in Las Vegas today, his office announced yesterday, and instead has demanded that the president publicly apologize for remarks he made earlier this year discouraging travel to Las Vegas.

“While I appreciate the offer, I am not interested in a handshake and a hello from President Obama,” Gibbons said in a statement. “I am interested in an apology and plan to undo the damage the president did.”