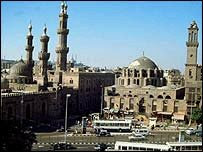 Obama will be apologizing to the Muslim world from Cairo University next week.

The New York Times reported today that Barack Obama will speak at Cairo University when he visits Egypt next week.
It’s not clear if the last paragraph of the article was meant to be a joke or not, via Free Republic:

Right outside the university’s gates, vendors selling items from small kiosks said they had more pragmatic concerns than international relations. That is often the case in a country where about half the population struggles to survive on less than $2 a day.

“I am trying to get a birth certificate to get a job,” said Samia Abdel Hafiz, 52, as her 9-year-old daughter peddled tissues to students on the street. “Whenever I apply for a job they ask me for the birth certificate. Maybe Obama can help get my paperwork through.”

Someone needs to tell Abdel- she doesn’t need one.