The Iranian regime promoted radical cleric Muqtada al-Sadr to the position of ayatollah. 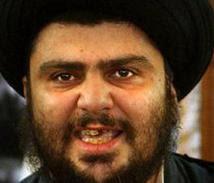 Maybe he’ll be able to afford some new teeth now.

Radical Iraqi Cleric Muqtada al-Sadr made his first public appearance in two years this past weekend.
He’s kept a low profile since his Mahdi Army got thumped by the Iraqi Army last year.
AKI reported, via LGF:

Radical Iraqi Shia cleric, Moqtada al-Sadr, is reported to have assumed the title of Grand Ayatollah after concluding his studies in the holy city of Qom in Iran. Sources close to the cleric’s faction released the news to the Arab daily, al-Sharq al-Awsat.

Around 70 supporters of al-Sadr on Sunday concluded a conference in the Turkish city of Istanbul where they elected new leaders and mapped out their future.

Al-Sadr, who leads the Mahdi Army militia, also met both Recep Tayyip Erodgan, the Turkish prime minister, and president Abdullah Gul in Ankara on Friday during his visit to Turkey.

Al-Sadr joined his supporters after completing two years of study in Iran and was expected to return to Iraq this week to resume his religious leadership.

During the Shia conference entitled ‘The Al-Sadr faction and future challenges’, Al-Sadr’s supporters renewed their commitment to fight the occupation of their country and demand the removal of all foreign troops, while seeking greater collaboration with other Iraqi political parties.

A year ago Shiite leaders in Iraq denounced the al-Sadr militia, including Ayatollah Ali Sistani, the senior Shiite cleric in Iraq, and Grand Ayatollah Najafi who even issued a fatwa against the al-Sadr fighters.