More Hope and Change…
** Earlier it was reported that the Obama Administration may have targeted GOP donors in deciding which Chrysler dealerships would have to close their doors.
** Later it was discovered that a Big Dem Donor Group was allowed to keep all 6 Chrysler dealerships open…. And, their local competitors were eliminated.
** The Auto Task Force, which includes Obama cabinet members, is reportedly calling the shots on which dealerships will close and stay open.
** Steven Rattner leads The Auto Task Force and is married to the former National Finance Chair of Democratic Party, Maureen White.
** The closings in several instances appear to benefit Dem donating dealers where local GOP-linked dealerships were closed.
** Even Rep. Vern Buchanan (R-Fla) lost his Chrysler dealership in Florida and found out from a colleague on the House floor.
** Lithia Motor Group’s owners gave $15,000 to two Democrat candidates and support nationalized healthcare. They will likely lose just two of 29 dealerships and gain 5 more.
** One report claims the odds that these Chrysler closings occurred without partisan bias are less than 1%.
** After closing the 789 dealerships Chrysler announced that they are already looking to open new franchises.
** Using the list of all 789 dealerships to be closed, WND found that owners contributed $450,000 to GOP presidential candidates; $7,970 to Sen. Hillary Clinton; $2,200 to John Edwards and $450 to Barack Obama. 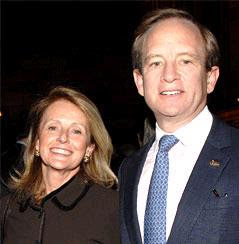 Car Czar Steve Rattner and wife Maureen White, who is the former National Finance Chair of Democratic Party.
Rattner and his Auto Task Force decided on which dealerships would close and which would stay open.

The Washington Examiner reported this morning on the partisan Chrysler dealer closings.

Evidence appears to be mounting that the Obama administration has systematically targeted for closing Chrysler dealers who contributed to Repubicans. What started earlier this week as mainly a rumbling on the Right side of the Blogosphere has gathered some steam today with revelations that among the dealers being shut down are a GOP congressman and closing of competitors to a dealership chain partly owned by former Clinton White House chief of staff Mack McLarty.

The basic issue raised here is this: How do we account for the fact millions of dollars were contributed to GOP candidates by Chrysler who are being closed by the government, but only one has been found so far that is being closed that contributed to the Obama campaign in 2008?

Florida Rep. Vern Buchanan learned from a House colleague that his Venice, Florida, dealership is on the hit list. Buchanan also has a Nissan franchise paired with the Chrysler facility in Venice.

“It’s an outrage. It’s not about me. I’m going to be fine,” said Buchanan, the dealership’s majority owner. “You’re talking over 100,000 jobs. We’re supposed to be in the business of creating jobs, not killing jobs,” Buchanan told News 10, a local Florida television station.

Buchanan, who succeeded former Rep. Katharine Harris in 2006, reportedly learned of his dealership’s termination from Rep.Candace Miller, R-MI. Buchanan owns a total of 23 dealerships in Florida and North Carolina.

Also fueling the controversy is the fact the RLJ-McCarty-Landers chain of Arkansas and Missouri dealerships aren’t being closed, but many of their local competitors are being eliminated. Go here for a detailed look at this situation. McClarty is the former Clinton senior aide. The “J” is Robert Johnson, founder of the Black Entertainment Television, a heavy Democratic contributor…

There’s more at The Examiner.

Obama’s Auto Task Force includes several of his cabinet members and is led by Steven Rattner:

A reader notes something about “car czar” Steven Rattner: “Rattner is married to Maureen White, the former National Finance Chair for the Democratic Party.” The comment: “So one of the guys advising SecTreas on this thing is married to someone who used to be one of the people in charge of fundraising for the Democratic Party. This explains so much it’s scary.” Well, it bears a close look.

Jim Hoft
Jim Hoft is the founder and editor of The Gateway Pundit, one of the top conservative news outlets in America. Jim was awarded the Reed Irvine Accuracy in Media Award in 2013 and is the proud recipient of the Breitbart Award for Excellence in Online Journalism from the Americans for Prosperity Foundation in May 2016.
They Know Who Won: Thoroughly Defeated Democrats Urge Joe Biden to Cancel Future Debates
DISGUSTING! Joe Biden Calls Trump a "Racist" then Lectures Americans on How Insults are "Demeaning" in Same Answer (VIDEO)
Joe Biden Tells Co-Debater Chris Wallace He Does Not Support the Green New Deal -- But That's Not What It Says on His Website!
Sean Hannity on the Choice for President: Do You Want a Fighter or a Half-Away Corpse who Can Barely Memorize His Lines (VIDEO)
HUGE! Hispanic Voters at Telemundo Say President Trump OVERWHELMINGLY Won Debate 66% to 34%
See more...