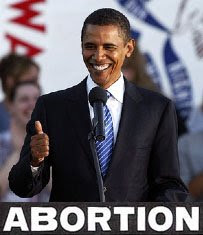 What’s that you were saying about Obama bringing the number of abortions down?
Today, two days after he was honored at Notre Dame, LifeNews reported that Barack Obama’s budget calls for taxpayer-funded abortions in the nation’s capital.

The budget Obama submitted to Congress urges the House and Senate to repeal a law sometimes called the Dornan amendment that has prevented tax-funded abortion in the District of Columbia for many years.

Congress, as authorized by the U.S. Constitution, holds complete legislative authority over the District of Columbia and, therefore, determines whether taxpayer dollars will be used to fund abortions for poor women there.

Fr. Jenkins… Sometimes it’s wise to pay attention to a man’s actions…
And, not just his flowery rhetoric.