Here is a first look at the Chrysler Dealership closings: 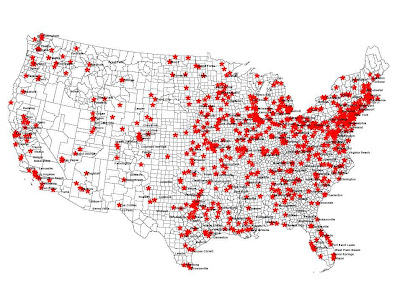 It looks like the Left Coast survived the cuts better than the rest of the country.
Using the list of all 789 dealerships to be closed, WND found that owners contributed $450,000 to GOP presidential candidates; $7,970 to Sen. Hillary Clinton; $2,200 to John Edwards and $450 to Barack Obama. Chrysler dealership owners donated to Republicans over Democrats by a ratio of 76% to 24% in 2008. Considering this, it looks like the democrats did VERY WELL in the Chrysler closings.
Meanwhile, Slim Guy is still crunching the donation’s data.

Now, here is a map of the Chrysler closings compared to Red and Blue Counties in the 2008 election:

Click to Enlarge
Gwynne from Texas is working on more maps to compare different statistics including this:

I am looking for current Congressional district boundaries from the USGS or Census data which is usually available for free download in GIS formats. Household income data is also available by census tract and we can make a map with that shading as well. I can shade the counties by votes (red vs. blue) if we have a dataset that I can link to the county layer.

When I complete the geocoding for the Open dealers, we can do a spatial analysis with regards to areas around each open dealer – closed dealerships within a 20 mile radius, for example.

That ought to do it.
Thank you, Gwynne!

The White House denied Thursday charges by conservative bloggers that President Obama’s Auto Task Force, which is overseeing the restructuring of the U.S. auto industry, targeted for closure Chrysler dealers who have contributed to Republicans.

“We don’t make those decisions. Ok?,” said White House Press Secretary Robert Gibbs. “Chrysler makes those decisions. So I am sure you can send Chrysler the address of the blog that you refer to. … We’re not involved in making those decisions I would think your question would be appropriately dealt with by the company that is.”

Chrysler disclosed in bankruptcy court this month its plan to close 789, or about a quarter, of its 3,200 U.S. dealerships by June 9, provoking a public outcry over the impact.

“In the case of Chrysler I think 75 percent of the auto dealers remained open; that encompasses about 87 percent of annual auto sales,” Gibbs said Wednesday.

Chrysler has said the process for selecting which dealerships the company would keep was based on sale volume, location, local market share and potential, customer satisfaction indices and warranty repair availability.

But bloggers say politics was also part of the formula. Among the Chrysler dealers targeted for closure are Florida Republican Rep. Vern Buchanan and competitors to a dealership chain partly owned by Mack McLarty, who served as chief of staff to former President Bill Clinton.

Bloggers have also found that some of the dealers have donated nearly $150,000 to GOP candidates and organizations.

“If this data can be validated, it would appear to be further proof that the Obama administration is willing to step over any line to advance its agenda,” blogger Doug Ross wrote on his page. “It bodes poorly for America and the rule of law.”

But, despite what Gibbs says, Astute Bloggers reported that Obama officials are calling the shots.
Via Reuters:

A lawyer for Chrysler dealers facing closure as part of the automaker’s bankruptcy reorganization said on Tuesday he believes Chrysler executives do not support a plan to eliminate a quarter of its retail outlets.

Lawyer Leonard Bellavia, of Bellavia Gentile & Associates, who represents some of the terminated dealers, said he deposed Chrysler President Jim Press on Tuesday and came away with the impression that Press did not support the plan.

“It became clear to us that Chrysler does not see the wisdom of terminating 25 percent of its dealers,” Bellavia said. “It really wasn’t Chrysler’s decision. They are under enormous pressure from the President’s automotive task force.”

Again here is what we know so far–
** Earlier it was reported that the Obama Administration may have targeted GOP donors in deciding which Chrysler dealerships would have to close their doors.
** Later it was discovered that a Big Dem Donor Group was allowed to keep all 6 Chrysler dealerships open…. And, their local competitors were eliminated.
** The Auto Task Force, which includes Obama cabinet members, is reportedly calling the shots on which dealerships will close and stay open.
** Steven Rattner leads The Auto Task Force and is married to the former National Finance Chair of Democratic Party, Maureen White.
** The closings in several instances appear to benefit Dem donating dealers where local GOP-linked dealerships were closed.
** Even Rep. Vern Buchanan (R-Fla) lost his Chrysler dealership in Florida and found out from a colleague on the House floor.
** Lithia Motor Group’s owners gave $15,000 to two Democrat candidates and support nationalized healthcare. They will likely lose just two of 29 dealerships and gain 5 more.
** One report claims the odds that these Chrysler closings occurred without partisan bias are less than 1%.
** After closing the 789 dealerships Chrysler announced that they are already looking to open new franchises.
** Chrysler dealership owners donated to Republicans over Democrats by a ratio of 76% to 24%.
** Using the list of all 789 dealerships to be closed, WND found that owners contributed $450,000 to GOP presidential candidates; $7,970 to Sen. Hillary Clinton; $2,200 to John Edwards and $450 to Barack Obama.