Democrats continue to reward base– 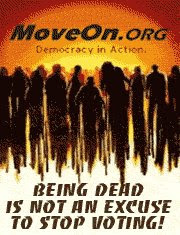 (People’s Cube)
It’s really only fair.
Thousands of dead people will receive a stimulus check this week for their support over the decades.

This week, thousands of people are getting stimulus checks in the mail. The problem is that a lot of them are dead. A Long Island woman was shocked when she checked the mail and received a letter from the U.S. Treasury — but it wasn’t for her.

Antoniette Santopadre of Valley Stream was expecting a $250 stimulus check. But when her son finally opened it, they saw that the check was made out to her father, Romolo Romonini, who died in Italy 34 years ago. He’d been a U.S. citizen when he left for Italy in 1933, but only returned to the United Stated for a seven-month visit in 1969.

The Santopadres are not alone. The Social Security Administration, which sent out 52 million checks, says that some of those checks mistakenly went to dead people because the agency had no record of their death. That amounts to between 8,000 and 10,000 checks for millions of dollars.