If only we had a responsible news service in this country like Pravda or China News…
Instead we’re cursed with corrupt news organizations like McClatchy. 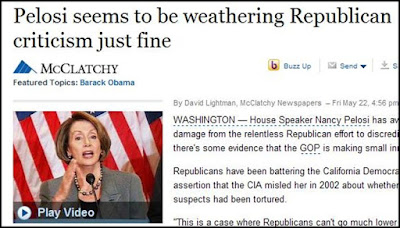 To no one’s surprise the media is already bailing out Pelosi.
Just seven days ago the Democratic Speaker accused the CIA of lying and even said, “They lie all the time.”

In a sane world their would be consequences for making such brazen, unsubstantiated and dangerous accusations. But, McClatchy is focusing instead on Republicans and their reaction to Pelosi’s lies.
The DNC could not have written this GOP hit piece any better:

“This is a case where Republicans can’t go much lower than they find themselves,” said Steven Smith , a congressional expert at Washington University in St. Louis , “so they have to go after the other side with whatever they can.”

So far, though, Pelosi remains a very strong House speaker. She can claim a string of major legislative victories since January, including this week’s passage of bills to give consumers more protection against credit card abuses and to crack down on financial fraud.

So the fact that Pelosi lied and smeared the CIA is obviously a minor glitch to McClatchy. The GOP is only using it because “they have to go after the other side with whatever they can.”
They’re only making a big stink about this because “they can’t go any lower.”
That’s disgusting, even for an organization like McClatchy.
The US media is dead.

What McClatchy won’t report any time soon is that Republicans and Democrats are tied back up in party identification. 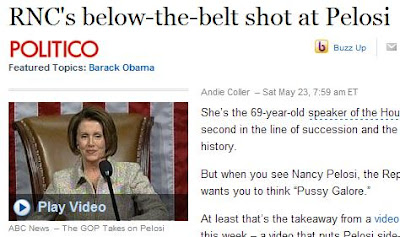 RNC’s below-the-belt shot at Pelosi, stepping over the line?
Let’s see. Pelosi lies and it’s the GOP’s fault.
Got that?