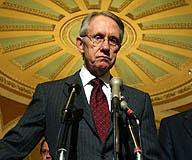 While no one expects Reid to praise George W. Bush, the degree to which he is judgmental and catty regarding the former president pretty much speaks for itself. Three pages in, after lamely trying to establish his bipartisan bona fides by talking up George H. W. Bush, Reid shares this charming anecdote about his early days in the Senate: “[Former Texas senator and vice-presidential candidate Lloyd] Bentsen went on and on effusively about what a quality man President-elect [H. W.] Bush was. Then he paused and said, ‘But watch out for his wife; she’s a bitch.’ I have never had anything against Mrs. Bush, but guided by Bentsen’s crude advice, I’ve always said that our forty-third president is more his mother than his dad.”

No wonder Reid is the Senate Majority Leader.