No bias here. No way. 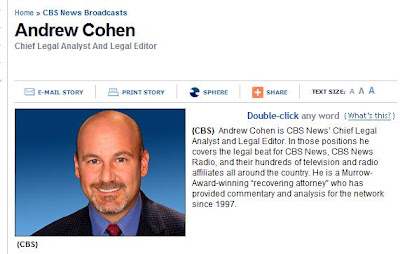 CBS analysy Andrew Cohen said what most liberal mainstream reporters have been wondering.
“Is Cheney just a dick?”
NewsBusters reported on today’s blog entry on the CBS website where Cohen asks his readers:

How do we account for Cheney’s failure or refusal to acknowledge all that we have learned about the world since 2002? How do we explain the worldview he continues to share with his camp followers both in and out of power? Do we chalk it up to him being a stubborn, venal, self-righteous man incapable of admitting his own mistakes? Is he truly what Andrew Sullivan calls a “dead-ender?” Do we hang it on his ideology? On his Western individualism that eschews the need for consensus and compromise? Or is he, as many people say, just a dick.

This is just Cohen’s way of admitting that Cheney mopped the floor with the Boy Wonder.

Related… Jules Crittenden has a recap of yesterday’s action.