Obama liked it but not everyone saw the humor in the dead Rush Limbaugh joke. 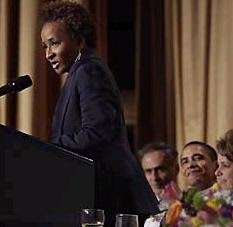 An editor with Britain’s Daily Telegraph who was at the dinner wrote that liberals will give Sykes a pass, since her target was a right-wing talk show host. And he marveled at Obama’s response.

“That’s way, way beyond reasoned debate or comedy and Obama’s reaction to it was astonishing,” wrote Toby Harnden. “Imagine if a comedian ‘joked’ that Obama was a terrorist who was guilty of treason and should be tortured and allowed to die. There would justifiably be an outcry.”

Unlike previous years when George Bush was lampooned by liberal icons, at this year’s event comedian Wanda Sykes passed over Obama and tore into Rush Limbaugh, Sarah Palin, Sean Hannity and other conservatives.