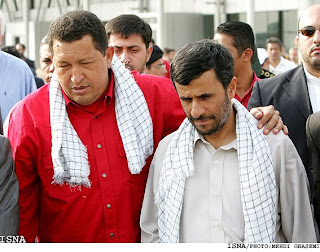 Hugo and Mahmoud
The Marxist leaders of Venezuela and Bolivia are supplying Iran with uranium according to a new Israeli report.
FOX News reported:

Venezuela and Bolivia are supplying Iran with uranium for its nuclear program, according to a secret Israeli government report obtained Monday by The Associated Press.

The two South American countries are known to have close ties with Iran, but this is the first allegation that they are involved in the development of Iran’s nuclear program, considered a strategic threat by Israel.

“There are reports that Venezuela supplies Iran with uranium for its nuclear program,” the Foreign Ministry document states, referring to previous Israeli intelligence conclusions. It added, “Bolivia also supplies uranium to Iran.”

The report concludes that Venezuelan President Hugo Chavez is trying to undermine the United States by supporting Iran.

The report also mentions that Hezbollah is setting up outposts in South America.
YNet News has more:

Venezuela is helping Iran circumvent the Security Council’s economic sanctions and is also suspected of providing Tehran with uranium, while Hizbullah is setting up terror cells in south America, this according to an official Foreign Ministry document obtained by Ynet.

…The report, which is based on information gathered by military and diplomatic sources around the world, both Israeli and foreign, claims that Iran had begun its infiltration of Latin America as early as 1982, when it forged ties with Cuba. Over the years Tehran opened embassies in Mexico, Brazil, Colombia, Argentina, Chile, Venezuela and Uruguay. The dossier also mentions Iran’s involvement in the terror attacks on the Israeli embassy in Buenos Aires in 1992 and on the AMIA Jewish community center in the Argentinean capital in 1994.

There were reports back in 2007 that Venezuela was mining uranium for Iran.

In December 2008 it was reported that Venezuela was helping Iran smuggle arms into Syria.