Hope, Change and Blackmail!…
Rahm Emanuel, the son of a Zionist hero who fought for the establishment of Israel, met secretly with Jewish leaders at AIPAC and told them that the Obama Administration would thwart Iran’s nuclear program only if Israel resumed peace talks with the Palestinians. 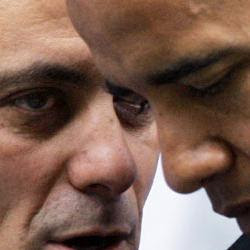 Of course, any negotiations with the Palestinians would mean that Israel would lose more land and gain more terror.
The Jerusalem Post reported:

Thwarting Iran’s nuclear program is conditional on progress in peace negotiations between Israel and the Palestinians, according to White House Chief of Staff Rahm Emanuel.

Israeli TV reports said Monday that Emanuel made the comments in a closed-door meeting the previous day with 300 major AIPAC donors.

This is reprehensible.
Rahm should be ashamed of himself.

No wonder the Israelis are nervous, very nervous about Obama.

More… Dan Freidman adds: “Now it’s up to Israel to decide who it fears most, Obama or Ahmadinejad.”

UPDATE: Israeli Prime Minister Benjamin Netanyahu told AIPAC Monday that Israel is prepared to resume peace negotiations with the Palestinians without any delay and without any preconditions,