Well, what did you expect?
Obama and ACORN have been linked for years despite what you read in The New York Times.

One of Barack Obama’s first big “community organizer” jobs involved ACORN in 1992. Obama also trained ACORN employees. He represented ACORN in court. Obama worked with and protested with ACORN. His campaign donated $800,000 to ACORN this year for voter registration efforts.And, ACORN even canvassed for Obama in 2008.

Now there’s this–
Andrew Berman saw this today on the streets of New York City: 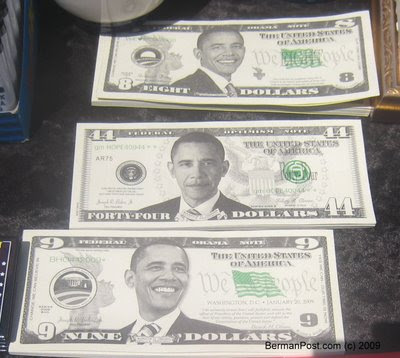 The ACORN symbol is on the Obama $44 dollar bill (in the green ink).