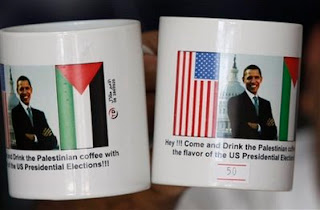 A Palestinian shop owner, not seen, displays mugs for sale with portraits of U.S President Barack Obama next to U.S and Palestinian flags at a souvenir shop in Gaza City , Sunday, May 31, 2009. (AP/Hatem Moussa)

Palestinian leader Mahmoud Abbas on Saturday told reporters in Cairo that he is convinced that US President Barack Obama is firmly committed to finally ejecting the Jews from Judea and Samaria.

Abbas spoke to the press after briefing Egyptian President Hosni Mubarak on his visit to the White House late last week, during which Obama apparently agreed with his guest that existing Jewish communities in Judea and Samaria must not even be allowed to experience “natural growth.”

“When the American administration talks about Israel’s duty to stop the settlements – including natural growth – it is a very important step,” noted Abbas.

Following their meeting last Thursday, Obama said that he also told Abbas to make a bit more of an effort to halt what he described as isolated and sporadic anti-Jewish incitement in Palestinian schools, mosques and media. Documentation by Israeli and international watchdog groups shows that the incitement is far from isolated or sporadic.

Meanwhile, Israeli officials cited by Ha’aretz decried the Obama Administration’s stiff demands that no more houses be built for Jews beyond the pre-1967 borders.

They noted that under former President George W. Bush, Israel reached understandings that the natural growth of existing towns would not subject to Israel’s commitments to halt settlement activity (commitments many Israelis see as null and void anyway since the Palestinians have failed to honor their reciprocal obligations).