The Family Research Center released this powerful video discussing Obama’s many lies on life issues and his disastrous trail of debt from the first 100 days of his administration.

The radical has already brought America- Change You Can Bereave In.
Here is more on Obama’s many broken promises:

Elected with a mandate to fix the economy President Obama has instead pursued a radical social agenda that preys upon the most vulnerable members of our society. Adn. Barack Obama’s irresponsible spending will leave this country in debt for generations.

The Cloak Room lists the tragic decisions from the first 100 days.
Hat Tip Joe and Greg 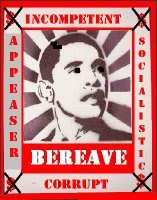