Joe Biden was wrong. He should have said our President will be tested MANY times in the first 100 days…

That US ship picked the wrong time to be hijacked.
20 US crew members were taken hostage by Somali pirates today. 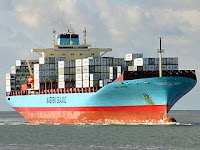 The hijacked vessel carrying 20 Americans is believed to be a Maersk cargo ship, similar to one seen in this photo. (FOX)

The US Navy has ordered its ships to the scene.
Team Obama said they were monitoring the situation.
No doubt, they are looking for a place to hold talks.
FOX News reported:

The U.S. Navy ordered its ships to the scene of a hijacking off the coast of Somalia Wednesday after pirates commandeered a U.S.-flagged cargo ship crewed by 20 U.S. citizens.

Officials would not say how many Navy ships are on the scene nor would it confirm the nationality of the crew members, but sources told FOX News the Danish-owned ship is operated by U.S. shipping company, Maersk Line Limited.

Pentagon Spokesman Bryan Whitman said he has “no information to suggest the 20 crew members of the Maersk Alabama have been harmed by the pirates.”

The Department of Defense has taken the lead on information-gathering. Whitman declined to comment when asked if military action would be taken.

Press Secretary Robert Gibbs said the White House is “closely monitoring the apparent hijacking of the U.S.-flagged ship in the Indian Ocean and assessing a course of action to resolve this situation.”

TigerHawk says this is “testing time” for Team Obama.

UPDATE: The Americans are holding at least part of the ship.
CBS News is reporting, via LGF:

The crew of a hijacked U.S. cargo ship is in a standoff with Somali pirates after attempting to retake the vessel, military sources told CBS News correspondent David Martin.

The sources told CBS News that crew members overpowered the pirates, taking one into custody, but the hijackers still held the ship’s master hostage. The American crew is in control of at least part of the ship and crew members have been in contact with their families.

There has been no official confirmation regarding the ship’s status.