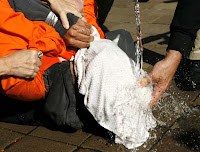 ABC also posted their photos and reported where they work:

According to current and former government officials, the CIA’s secret waterboarding program was designed and assured to be safe by two well-paid psychologists now working out of an unmarked office building in Spokane, Washington.

Both men declined to speak to ABC News citing non-disclosure agreements with the CIA. But sources say Jessen and Mitchell together designed and implemented the CIA’s interrogation program.

You can bet the loons on the Left are already planning their attacks on these two “well-paid” psychologists.

Last night Barack Obama claimed that waterboarding was torture. The president also inaccurately used Great Britain during World War II as an example of a country that did not torture. Obama did not say whether he will demand that our military stop using this “torture” technique during SERE training.

UPDATE: The Far-Left Anti-American website Democracy Now actually outed these two officials in 2007. The article also compares the interrogation program to the SERE program that our own soldiers go through. The two psychologists were affiliated with the SERE training program. Far Left Bush-hating Senator Carl Levin was also investigating these two officials back in 2007.

And to no one’s surprise… The New York Times also outed the psychologists back in 2006.