To no one’s surprise, the US media ignored President Obama bowing to the Sunni Muslim King of Saudi Arabia at the G20 meetings.
But the Sydney Morning Herald noticed the gesture: 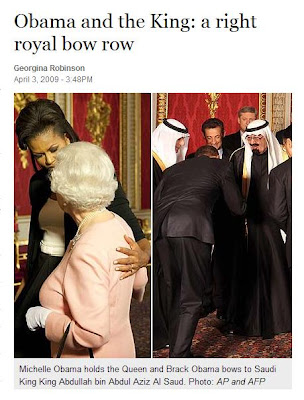 Not everyone ignored the First Couple’s awkward behavior around international royalty.
From the Sydney Morning Herald, via Free Republic:

Conservative American commentators have accused Barack Obama of “grovelling” to an Arab monarch at the G20 summit in London.

A photo and video footage of the US President bowing to Saudi Arabian King Abdullah at yesterday’s G20 meet-and-greet has been doing the rounds on the internet today.

Mr Obama appears to shake the King’s hand and then bow from the waist while French President Nicholas Sarkozy looks on.

Leading conservative blogger Michelle Malkin and Dakota Voice both wrote of their outrage at the President’s deference to a foreign monarch.

“The whole thing is embarrassing. Its like the `American Hillbillies go to Europe’,” Malkin wrote.

“He is throwing American power and prestige out with both hands as fast as he can.”

Dakota Voice contributor Bob Ellis said the bow was a gesture of submission.

“The leader of the most free nation in the world should not be slobbering on the ring of some king,” Ellis wrote.

But American etiquette expert Gloria Starr, who has met the King’s wife and hosted two of their daughters in her finishing schools, told smh.com.au there was nothing wrong with Mr Obama’s display of deference.

Once again the US media hid this event from the American public.
They were too busy drooling over Michelle Obama’s awkward moment with the Queen (See Townhall).
This is how news is now reported in the Age of Obama.