This is comforting.
The al-Qaeda terrorists arrested this week in Great Britain worked at the airport. 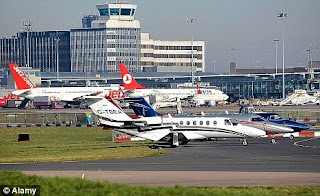 The Pakistani nationals and Al-Qaeda members arrested this week in Great Britain worked at the Manchester Airport and were linked to the terrorists who attacked Mumbai last year.
The Daily Mail reported:

Members of the alleged Al Qaeda cell suspected of plotting a Bank Holiday terror atrocity worked for a firm based at Manchester Airport.

At least one drove vans for a cargo company which has access to sensitive locations.
A further two had passed security industry checks which enabled them to guard premises overnight, further raising fears that members of the gang – all but one of them Pakistani students – were planning to infiltrate high-profile targets before an attack.

The revelations came as police continued to question the 12 suspects and search properties across the North West, including one being examined as a possible bomb factory.

It was further claimed that some of the men have links to the terror group accused of the devastating Mumbai attacks in India which left more than 170 dead. The group, Lashkar-e-Taiba, or Army of the Righteous, was also blamed for the Lahore cricket atrocity.

The terrorists were targeting shopping malls and the popular Birdcage nightclub.