Telegraph: President Pantywaist Does Not Know Who the Enemy Is

This guy gets it… 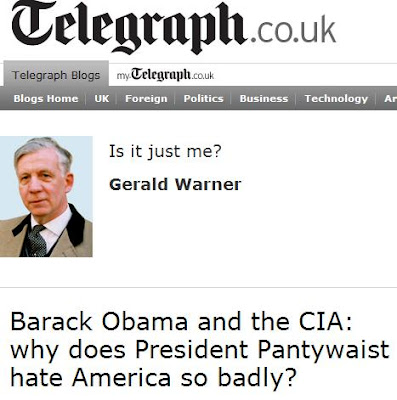 Gerald Warner lobbed another blistering attack on President Pantywaist and his assault on America. Even from Great Britain, it’s clear that Obama is destroying the country.
The Tlegraph reported:

If al-Qaeda, the Taliban and the rest of the Looney Tunes brigade want to kick America to death, they had better move in quickly and grab a piece of the action before Barack Obama finishes the job himself. Never in the history of the United States has a president worked so actively against the interests of his own people – not even Jimmy Carter.

Obama’s problem is that he does not know who the enemy is. To him, the enemy does not squat in caves in Waziristan, clutching automatic weapons and reciting the more militant verses from the Koran: instead, it sits around at tea parties in Kentucky quoting from the US Constitution. Obama is not at war with terrorists, but with his Republican fellow citizens. He has never abandoned the campaign trail.

That is why he opened Pandora’s Box by publishing the Justice Department’s legal opinions on waterboarding and other hardline interrogation techniques. He cynically subordinated the national interest to his partisan desire to embarrass the Republicans. Then he had to rush to Langley, Virginia to try to reassure a demoralised CIA that had just discovered the President of the United States was an even more formidable foe than al-Qaeda.

“Don’t be discouraged by what’s happened the last few weeks,” he told intelligence officers. Is he kidding? Thanks to him, al-Qaeda knows the private interrogation techniques available to the US intelligence agencies and can train its operatives to withstand them – or would do so, if they had not already been outlawed.

So, next time a senior al-Qaeda hood is captured, all the CIA can do is ask him nicely if he would care to reveal when a major population centre is due to be hit by a terror spectacular, or which American city is about to be irradiated by a dirty bomb. Your view of this situation will be dictated by one simple criterion: whether or not you watched the people jumping from the twin towers…

President Pantywaist’s recent world tour, cosying up to all the bad guys, excited the ambitions of America’s enemies. Here, they realised, is a sucker they can really take to the cleaners. His only enemies are fellow Americans. Which prompts the question: why does President Pantywaist hate America so badly?

It’s going to be a difficult switch for democrats to start focusing on Al-Qaeda and not their fellow Americans.
Warner nailed it.

When the scandal came out about Jeremiah Wright, Jr., people asked if Obama subscribed to Wright’s hated view of the United States. Nah, said the left. Just because he sat in the pew of Wright’s church for 20 years, took tapes of Wright’s sermons to Harvard with him, named his book after one of Wright’s sermons and based his 2004 DNC speech on a Wright sermon, we have no evidence that Obama bought into the crap Wright preached.

Only now we do.

With Obama’s recent “America is a Bad Country” world tour, it become pretty evident that not all of Jeremiah Wright’s sermons went over Obama’s head.