A 23 month-old child in Texas was the first person to die from the Swine Flu in the US.
This was the first reported swine flu death outside of Mexico.
H1N1 Swine Flu Google Map– Wednesday, April 29, 2009: 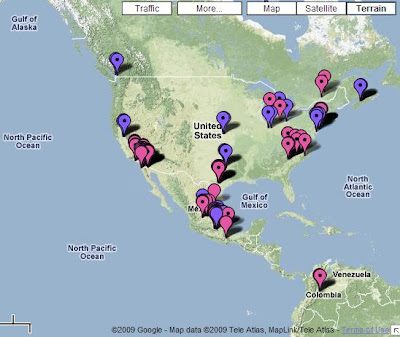 The media is not disclosing much information on the child’s identity. The CDC released no other information about how, or where, the child may have contracted the disease.
The AP reported:

The first U.S. death from swine flu has been confirmed — a 23-month-old child in Texas — amid increasing global anxiety over a health menace that authorities around the world are struggling to contain.

The flu death was confirmed Wednesday by Dr. Richard Besser, acting director of the Centers for Disease Control and Prevention. In an interview with CNN, he gave no other details about the child.

The world has no vaccine to prevent infection but U.S. health officials aim to have a key ingredient for one ready in early May, the big step that vaccine manufacturers are awaiting. But even if the World Health Organization ordered up emergency vaccine supplies — and that decision hasn’t been made yet — it would take at least two more months to produce the initial shots needed for human safety testing.

The U.S. swine flu caseload rose to 65 in six states on Tuesday.

In response to this news… The Obama Administration tried to downplay the seriousness of the situation.
The CDC’s Dr. Richard Besser said:

“Seasonal flu each year causes tens of thousands of deaths in this country — on average, about 36,000 deaths,” Besser said. “And so this flu virus in the United States, as we’re looking at it, is not acting very differently from what we saw during the flu season.”

So one death out of 65 cases is nothing to worry about?
That’s nearly 2% of the population.

In response to this latest news… Egypt ordered a cull of all pigs(?)