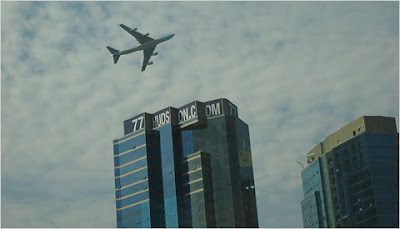 A jumbo jet being chased by a F-16 fighter jets buzzed Lower Manhattan this morning, panicking New Yorkers, many of whom were forced to evacuate their office buildings.

It was not a terrorist attack, however, but a photo opportunity for Air Force One, sources told the Post.

President Obama was in Washington at the time, but the low-flying 747 circling the Statue of Liberty was one of the planes used as Air Force One, sources said.

The NYPD and the city were notified of the planned flight, but did not share that information with Mayor Bloomberg and other New Yorkers, many of whom said they were terrified.

Perfunction has a side-by-side of today’s flight with 9-11.